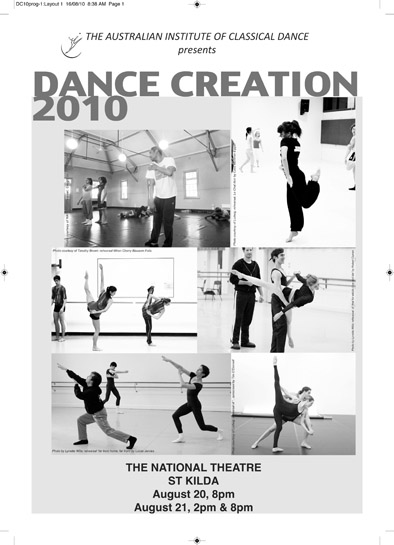 After the AICD’s Dance Creation 2010 opening night performance, the audience left the theatre smiling, talking and walking briskly. No doubt, the quality and variety of works and dance styles on show satisfied a wide range of tastes and certainly gave people something to talk about. No-one mentioned there was not a pointe shoe in sight but some noted that not all on offer was in the classical style.

The AICD’s Dance Creation 2010 took a long time to produce – fourteen years, in fact. That is how long this national, biennial choreographic showcase has been running and this year’s three-performance season was the culmination of the intentions and results of that first Dance Creation, held in 1996. Three of the six works in Dance Creation 2010 were by choreographers who got their start as winners of various awards made during the event’s original incarnation as a competition and the shift from pure classical style actually occurred at the very outset.

One of the great things about Dance Creation is the total artistic freedom given to the choreographers and this has really paid off. What a joy it has been to see the unfettered artistic evolution of a Timothy Brown, Lucas Jervies and Timothy O’Donnell.

The works were performed by dancers from The Australian Ballet, The Australian Ballet School, NAISDA College of Dance, QUT Faculty of Creative Arts (Dance) and Ludwig, the recently-formed, Perth-based ensemble, whose work embraces performance, choreography, photography and film.

The program opened with Timothy Brown’s When Cherry Blossom Falls, set to Ludovico Einaudi’s Divenire spliced with nature sounds, the latter unacknowledged in the printed program and presumably the choreographer’s own addition. Using an ensemble of one male and six female QUT dancers, Brown matched the lushness of Einaudi’s piano score by a continuous flow of movement of a low muscle-tension, contemporary style. Bodies fell to the floor and tumbled, rising individually and grouping into sculptural formations, giving the work shifting perspectives from above and below. Despite all the floor work, the overall impression was one of lightness. The random geometry of the ensemble work, presented with such naturalness and simplicity, imbued the piece with lyrical feeling. This is definitely a work that would suit a range of dance bodies and styles of interpretation and, as such, would sit very nicely on a company that prides itself on versatility.

We didn’t get too long to reflect on the evanescence of blossom before Timothy O’Donnell hijacked the audience with Trust Me on the Sunscreen, in which he also performed, with his partners in art, Emma Sandall and Cass Mortimer Eipper. The trio are Ludwig. The work, set to Baz Lurhmann’s monologue Everybody’s Free (To Wear Sunscreen, is a witty, energetic romp in classical style, revved up to underline the rousingly positive advice on offer, which includes statements such as: “You are not as fat as you imagine…” This got a big laugh of recognition from the audience, most of whom were young dancers. The expansiveness of the choreography is given a punchy delivery by the dancing, which gets a big leg-up – literally – from Emma Sandall’s virtuosity. She is a stunningly extended dancer who understands sensitive articulation, which should be the aim of any classical dancer who wants to take a move all the way but not cross into acrobatics.

Deon Hastie’s Caught is “an exploration into the power of mussing, an aboriginal technique that involves capturing someone’s affection by using a special root of a tree and rubbing it into the skin.” It was performed by dancers from NAISDA and used a contemporary style, combining 20th C non-classical with more recent influences of street styles and some indigenous moves. This was Hastie’s – and NAISDA’s – first Dance Creation and what a revelation it was. At the risk of sacrilege, if you needed an antidote to classical overdose, this was it. The ensemble of three men and four women threaded their way through the intricacies of physical encounters while the bassy, infectious beat of the electro score, (from Book Shade’s Movements) made for an appropriately thematic hypnotic effect. The spell-mixing motif, of one hand cupped and the other stirring around in it, repeated by the men, was especially memorable and one good, original move is worth dozens that you’ve seen before. Deon Hastie is definitely a choreographer to watch and Caught, along with When Cherry Blossom Falls, is the work I would most like to see again.

Cass Mortimer Eipper, representing Ludwig’s nomination, showed an excerpt from Le Chat Noir, a larger work that he is creating on Link Dance Company, the graduate company based at WAAPA. This was a rhythmic, fun piece featuring five women and relying on isolated body part moves for its effect. Set to the infectious beats of Der Ditter Raum’s Swing Bop and the Benny Goodman standard Benny Rides Again, on this occasion by Big Band Remixed and Reinvented, it evoked the atmosphere of a cabaret, a suggestion also offered by the work’s name, which harks back to the legendary venue of late 19th C Paris. It was difficult to gauge whether the excerpt was an isolated piece of whimsey or something more substantial in the context of the work as a whole. Nevertheless, it was performed with verve and charm and indicated that Ludwig can produce more than one type of choreography. Between that and the company’s ability to deliver gob-smackingly good dance, they should go a long way, if they can stay highly productive and keep clutching any lifelines they can grasp in the daily battle for survival faced by any genuinely artistic venture. The company’s website is light on disclosure of the business end of things, merely acknowledging a few private companies as ‘supporters’, which indicates that it receives no funding.

Robert Curran’s that for which I live and die is a duet for his fellow members of The Australian Ballet, Brett Chynoweth and Sarah Thompson. Set to Eugene Ughetti’s Intermezzo and James Newton Howard’s Snow Falling on Cedars, it was described by the choreographer as “an abstract exploration of existentialism, based on the writings of Soren Kierkegaard and focuses on one man’s experience/understanding/struggle with the meaning of his existence at an unspecified time in his life.” That’s a lot to tackle in the ten or so minutes of the work’s running time. What Curran does offer is a hardcore classical ballet duet fragmented into solos for both dancers, allowing them to interact at certain moments. A highlight of inventiveness has the man handling the woman by her hip, with one body slipping around the other in an agonised relationship of connecting awkwardly, which is contrasted with incidents of paralysing isolation. Chynoweth and Thompson made their own contribution to the work with their stellar performance of it. Whether the depth of choreographic talent evidenced here goes anywhere, is entirely up to Curran and depends on how productive he can be, which is the knife edge for any creative artist.

The most sophisticated work on the program was Lucas Jervies’ from home far from, using an ensemble of 14 dancers from The Australian Ballet School. Although we should never judge a choreographer by the size of his ensemble, the ability to manoeuvre and manipulate numbers of bodies is a core skill that any aspiring choreographer needs to develop because any repertory or commissioning dance company is likely to have ten or more dancers. Jervies shores up his efforts by enlisting the muscle of Beethoven as back-up, using Piano Sonata #32 (youtube offers a magnificent selection of renditions, including from Barenboim, Arrau and Richter) as his score. The piece is part homage, part thank you to Balanchine, Beethoven, Bournonville, Bob Fosse, Marco Goecke, Michael Jackson, Stephen Page and Georg Reischl for their inspiration to Jervies.

The word homage implies reference but in Jervies’ case the influences are so filtered through his own interpretative vision that the only overt link I detected was to Goecke in some of the arm movements. This is only fleeting, as Jervies focuses on a combination of hand gestures and flagrant shoulder rotations, often with only slight body turns and minimal simultaneous movement of feet. Except for the fact that everything springs from classical technique, it looks like the biggest influence comes from the use of shoulder joints in street styles like hip hop. But the dancers don’t just wear out their shoulders and flap their hands. They are also challenged to move as an ensemble that morphs numerically into patterns and combinations that keep the piece moving satisfyingly. Jervies is a 21st C ballet choreographer, which is exactly what the artform desperately needs now because if it is not constantly renewing itself with new works and new challenges, it runs the risk of what befell the dinosaurs. For the last 20 years ballet has been dominated by “kerpow” athleticism and astonishing physical feats but little meaningful content and feeling. It’s time to turn the tables and a Lucas Jervies should be a number 1 recruit to the cause. As one of the adjudicators of the 1996 Dance Creation panel that awarded him the Edouard Borovansky Award for Student Choreographers, I am particularly pleased to see the show of promise pay off because more often than not, dance is as ephemeral as cherry blossom, so well observed by Timothy Brown.

It is to be hoped that all the participating choreographers will be proactive in mounting at least excerpts of their Dance Creation 2010 vids on youtube – the dance artist’s new best friend. For one thing, all the performers could be tagged and given some ongoing credit for their wonderful contributions. Cultivating a presence, sharing your work, exchanging with other creative people and exposing yourself to new influences can only improve your art. Worry about “giving it away” and intellectual property rights are not an issue if you use the quotation approach. Furthermore, as everything on the web is dated, you have proof of primacy of origin. It’s time to get feral. Art has no business being safe.

Dance Creation relies exclusively on sponsorship: some corporate, a lot from a few private sources and a huge amount in kind from the many interested parties, especially the AICD and the dance institutions, both company and educational that provide the material, the infrastructure and the enthusiasm to make Dance Creation happen. The unsung hero of this glorious quest is Dame Margaret Scott AC DBE, Founding Director of The Australian Ballet School and one of the major figures of Australian dance history. Her vision and tenacity have enabled the practical survival of this on-going venture. It was Dame Margaret who rescued Dance Creation from imploding as a competition by steering it towards its current format.

Dance Creation survives on a wing and a prayer and the boundless generosity and naïve optimism of a disparate cross-section of the dance community and their efforts to do the little bit they can by inspiring, begging and nudging others into doing as much. There is an old saying that when you can do very little, the worst thing you can do is nothing. Well, that’s one thing of which you cannot accuse this mob.

Footnote: The Australian Institute of Classical Dance was formed in 1991 by Marilyn Jones OBE following her receipt of a Creative Artists Fellowship from the Australian Government.
The Institute is a non-profit organisation with a board composed of eminent members of the dance profession. It was set up to oversee and encourage the development of Australian classical ballet.
Marilyn Jones, a celebrated 20th C ballerina, is the Artistic Director of the AICD. Garth Welch AM is Chair of the National Committee and Steven Heathcote AM is the national patron.