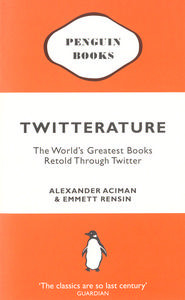 Actually, I needed a birthday present for my mother-in-law, so I picked up a copy ofTwitterature “The World’s Greatest Books Retold through Twitter” (Alexander Aciman and Emmett Rensin, Penguin Books, 2009).

The book is crap but I bought it anyway because although it knows sweet FA about literature, it is an excellent introduction for old people to tweeting. “Old” in my definition, is not just anyone over 25 but anyone who has not, for whatever reason, gazed into cyberspace, yearning to be transported to its magical centre and there attain the godly powers of net-navigating nerds.

A stupid “old” person can learn a lot from Twitterature because it has a glossary and an explanation of Twitter format. LOL, you’ll be pleasantly surprised how moronically one-dimensional and trite this internet development is. Very LCD (an “old” way of saying lowest common denominator, the historic phenomenon of tweeters who lived before tweeting was invented and therefore had to keep their ignorant, inarticulate opinions to themselves). Once you’ve got a handle on the jargon, u r ready to take on the text.

Just before you get excited, you need to know that it is only the Prologue to The Canterbury Tales. Although various periods and genres of Western literary history are covered, it is open to debate whether these are “the world’s greatest books,” especially when you consider the inclusion of two Dostoyevskys and not one James Joyce. More likely, they were chosen on the basis of what our authors, undergraduates at the University of Chicago, have read so far. Nothing to be ashamed of here.

Nor is it surprising that every book is turned into a first-person narrative since that is the nature of tweeting. The disappointment lies in the assumption that the book is the content of the storyline, so the treatment leaves you with something bearing mostly only a cursory resemblance to its source. It wouldn’t have occurred to me to think along these lines, if I hadn’t recently come across 80 Classic Books for People in a Hurry, illustrated by Henrik Lange and written by Thomas Wengelewski (Nicotext, 2009), which goes straight for the jugular with a delightfully subjective attempt to interpret a book as a whole and what it might be about. The more familiar you are with the books, the more amusing it is, even when dealing with some serious stuff. 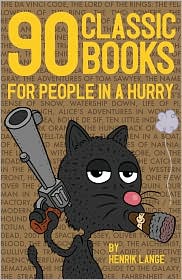 Either way, both works in question are not intended to introduce people to literature. Their purpose is to entertain and to that end, I quote the following from Twitterature(or Twitrature, as I think of it):

“I realise now that women should submit, and make me a sandwich while you’re down there.”

“My husband won’t give me a divorce. I would go Lorena Bobbitt on him if he had any use of his dick.”

“I’ve got it! Rather than accept financial aid from my friend, I’ll murder an elderly money-lender in cold blood. Why? I’m not telling.”

“After a time I’ve become very rich and successful, and very good-looking. This ought to mess with their heads back home.”

“Uh oh. This cave is a giant’s lair. He has a taste for cheese and my companions. He also has only one eye. Trying to keep from laughing.”

”We stripped off. I did lines off her tits. Couldn’t get it up and know not why. Smoked an entire pouch of tobacco instead.”

“Incredible. Everything you might ever need to survive on an island was in that ship. Guns, food, bread, books, you name it.”

“Before I cut off Grendel’s head my men sodomized him and I shat in his face. We used to do that in school, remember? (Is that messed up?)”

Not sure I should give this to my mother-in-law. She’s never read Beowulf. Might give her the wrong idea. I wonder how many men call their dicks Moby? Peace, bitches.