The best way to welcome a New Year is with a Dragon Dance. If you want to go all the way, include a Lion Dance. That’s the way the Chinese do it and when it comes to pageantry, colour and symbolism, they can’t be beaten. The dances not only add fun to the festivities but make double sure that the coming year will be a good one, filled with health, happiness and prosperity. Touching the dragon is considered particularly lucky, which must mean that taking part in a Dragon Dance is a fortunate opportunity, indeed.

As luck would have it, that’s exactly what happened to us when our martial arts teacher, Sifu Dana Wong, sent out a distress call for help with the dragon of the Federation of Chinese Associations (Vic) Inc., when regular members of the dragon dance team were unable to come and person power was needed for a gig at the Springvale Chinese New Year Festival last Sunday night. Big Bruce, as this dragon is affectionately known, was a gift to the Federation from the Chinese consulate and is intended for use both as a dynamic manifestation of living tradition and as a cultural artefact reaching out to the community at large.

Working Big Bruce, last Sunday, was a workout and a half as we stomped and lunged, twirled and plunged our serpentine way through streets and shops in Springvale. Big Bruce dived and rose through a sea of happy faces, delighting the crowds with energetic serpentine antics, propelled by the power of a big, beating drum, a banging gong and the crash of cymbals. This powerful dragon took his work of scaring away monsters and paving the way for good luck very seriously, indeed. Big Bruce may be made of cloth and hoops and sticks but it was us humans who were the props. 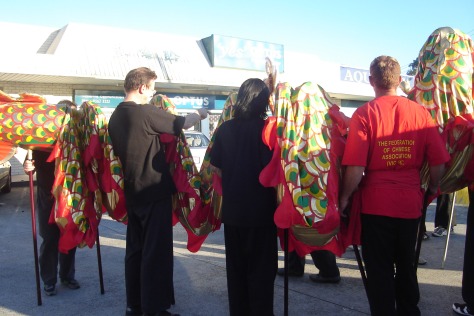 Dragons come in many lengths. This three-stick dragon has impressive mobility.

The two-stick dragon shows that a little dragon is lots of fun.

Both Dragon Dance and Lion Dance belong to the realm of Chinese martial arts. Sifu Wong, who heads Qian Li Dao Academy, explains, “Dragon dancing is a multi-faceted gem that reveals an integral part of Chinese culture through physical expression. Twirled within its weave of movements are ancient traditions combined with fitness training and martial arts. The expression of age-old beliefs and customs is preserved through the generations via the dance, while also providing an opportunity for fitness and the development of martial skills. The dragon dance symbolises longevity, prosperity and the search for eternal knowledge. Through participation in dragon dancing, anyone can contribute to the community, get healthy and learn a bit of culture along the way, but FUN is the icing on the cake!”

While there’s a lot to understand and know, fun is the integral component that our rough and ready troupe had down pat. Unlike the western dragon, which is presented as a monster to be slain, the Chinese dragon is a sacred creature of great power and benevolence. Its appearance is as complex as the cultural depth that informs it. With its serpent body, fish scales, eagle claws, tiger paws, camel head, bovine ears, stag antlers, clam belly, monstrous goggle eyes and human whiskers, it is a composite of all creatures and can move through water and air, as easily as on land. This dragon is your most-valued friend. We got that message across, no worries.

Just as the dragon has nine different creature components – the whiskers are not counted, except in my personal observation – so Big Bruce needs nine handlers. However, many parade dragons are much much, longer – the Melbourne Millennium Dragon being the longest in the world – and some are quite short. At Springvale, Big Bruce performed with several other two and three-stick dragons. In one glorious sequence, all dragons came together, rising majestically in support of the Lion Dance victor, as it reached high to snatch the victor’s prize of lettuce and money dangling from the veranda roof of Walrus Seafood Restaurant. In a kung fu miracle, my wing chun skills enabled me to take a snap of this magnificent moment although I, too, was ramming a stick into the stratosphere. 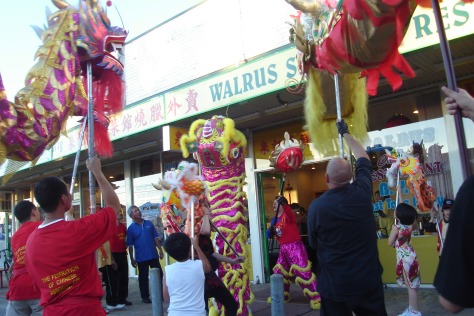 Lion Dance is performed as a competition between two lions, each one worked by a team of two very acrobatic performers. The lions appearing with us were the Melbourne Quan Anh Lion Dance. The dancers received some last minute coaching from the dazzlingly athletic David Tang, who cross trains in various martial arts including Choy Li Fut and Hung Gar. He lead both lions and dragons, working the dragon’s pearl – the spherical, flame-edged object of the dragon’s pursuit, symbolising wisdom, prosperity and universal energy as expressed by the concept of chi (Qi). It was a merry, exuberant dance as David leapt, spun and dashed about, wielding a sceptre topped with the enticing pearl. Sometimes he would throw himself down onto one knee and make the dragons jump over the pearl. 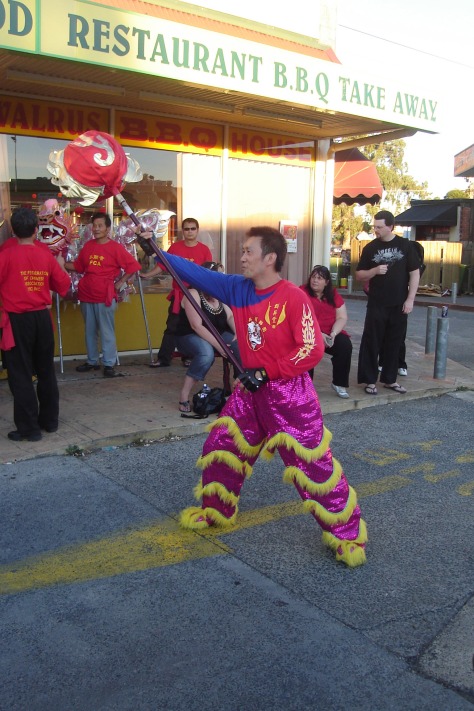 David Tang in action with the pearl. 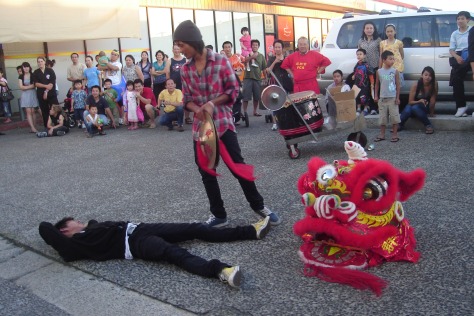 Red Lion dancers at the end of their gig.

As with all dance performances, the big no-nos are tripping up and not staying in step. The first we managed; the second proved much more difficult. Keeping the serpentine undulations of the dragon’s body synchronised in canon sequence requires great skill and much practice. Our effort was more of a jolly wobble and a reckless sway. At one point, when we swooped to round a corner, I nearly decapitated a performer from another troupe. Then there was the thrillingly perilous stampede through restaurants, in which we had to duck through doorways and dodge overhead fans.

In the case of our dragon, as with most things, the middle bit is not nearly as important as the beginning and the end. Working the head and tail of a dragon require considerable expertise. Big Bruce’s head weighs at least 15 kg. Hoisting it about in a dance that requires aerodynamic manoeuvres is an enormous physical and aesthetic challenge. Fortunately, Steve Colebrook, a professional musician, long-time martial artist and practised dragon dancer, was able to draw on the appropriate range of skills to do Big Bruce justice. The tail, which needs to move horizontally and vertically at the same time, was handled by La Wren Wong, another senior martial artist of long-standing experience in a range of movement arts. Handling Bruce’s head or tail is so abrasive to the hands that it requires the wearing of protective gloves.

The Springvale Chinese New Year 2010 Festival closed in the dark of night with a spectacular performance from all the dragons in front of the community stage in one of the large carparks. Fired up by the banging accompaniment, the dragons charged into the bright light, weaving in and out, over and under each other, creating patterns of brilliant colour and an atmosphere of exploding energy. The new year would be a good one.

Happy Year of the Tiger.

Postscript
Big Bruce’s next gig will be at the Glen Waverly Chinese New Year Parade on Febryary 28, then at Werribee annual festival’s Weerama Harmony Day parade, on March 14.

6 thoughts on “Dragon Dance Welcoming Year of the Tiger”